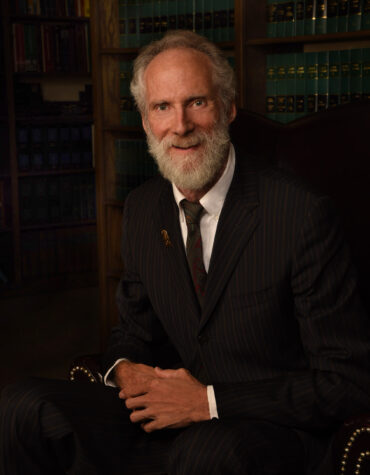 John had a profound love of family and Wyoming. He married Marilyn Paules, the true love of his life, in 1979. Of Marilyn, also a Laramie native, he wrote, “There is an old saying that behind every successful man is a woman. I think we need to update that saying, because I don’t believe that Marilyn has ever been behind me. Rather, she has always been in front of me, encouraging me to start projects I really did not want to do; cajoling me to finish projects of which I had tired; and dropping back once in a while to help me through a rough patch.”

Professor Burman was a Fulbright Teaching Fellow at Petrozavodsk State University in Karelia, Russia in 1998. He served as a Clinical Legal Education Specialist in Moscow, Russia, for the American Bar Association’s Central and East European Legal Initiative in the summer of 2000. In the summer of 2002, he worked for the United Nations Development Program in Minsk, Belarus, as a clinical evaluator and consultant. Professor Burman also consulted and taught in Jordan in 2004, 2005 and 2006. In 2006, Professor Burman received the University of Wyoming’s Outstanding Faculty Commitment to Internationalization Award (given by the university’s International Board of Advisers). In 2011, Professor Burman was awarded the title of “Honorary Professor of Law” at the Saratov State Academy of Law (Russia) “for great contribution to the development of international relations….”

John began his legal career as a Special Assistant Attorney General for the State of Minnesota. Several years later, he entered private practice with the Laramie, Wyoming, law firm of Corthell and King. His practice focused on consulting with lawyers about grievances and malpractice, often serving as an expert witness in such cases. In addition to his consulting and expert witness work, Professor Burman was actively involved in pro bono representation. In 2002, he was the recipient of the Wyoming State Bar’s Pro Bono Award for legal service work for indigent clients. Professor Burman also received the Gideon Award from the Wyoming Public Defender’s Office in 2005 “For Outstanding Contributions To the Ideals of Equal Justice and ‘Gideon’s Promise’ That Any Person Accused of a Crime Is Entitled to the Benefit of Counsel”. In 2010, Professor Burman was awarded the President Award by the Wyoming State Bar, for his ‘commitment to legal education, the legal community,… [and for] contributions to the Wyoming State Bar…”

The Legal Services Program that Professor Burman supervised is a live-client clinic in which third year students represent low-income persons in civil matters which will not generate a fee. Most cases involve: (1) domestic matters (usually disputes over child custody); (2) juvenile cases (abuse and neglect); (3) appeals from the denial of government benefits, such as Social Security Disability Benefits. Under supervision, students in the clinic perform all the roles of a lawyer, including making any necessary court appearances. In the summer of 2002, the Legal Services Program opened a Domestic Violence project in which students represent victims of domestic violence in civil matters. The Legal Services Program and the Domestic Violence Legal Assistance Project received the Wyoming State Bar’s 2007 Pro Bono Award for legal service work for indigent clients.

After retiring early due to his health, John unexpectedly found the other love of his life: the State of Wyoming Judicial Nominating Commission. As a champion for gender equality, he relentlessly advocated for his belief that equality should be reflected in our judiciary, especially when female candidates of equal or higher qualification applied for judgeships. He was delighted to see three women serving on the Wyoming Supreme Court – a step, he thought, in the right direction.